On 03 April, the North-Western Regional Committee of the Association of European Businesses held its annual general meeting.

After the moderator, Andreas Bitzi, Chairman of the North-western Regional Committee of the AEB and managing director of quality partners, officially opened the event, the speech was given to Philippe Pegorier, Deputy Chairman of the Board of AEB and president of Alstom Transport Rus, with the boards address. 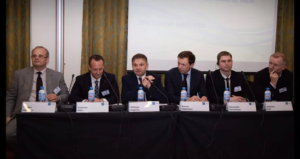 During the plenary session, Roman Golovanov, Chair of the Investment Committee of St. Petersburg, presented the opportunities the city offers for foreign investors, what support they can get by the administration and the investor’s front office.

The second part of the plenary session was devoted to Novgord Region. Alexander Dementyev, Director of the Agency for Development, presented the investment potential of the region and the support they can offer to investors. Andreas Goll, CEO of Saueressig in Novgorod, gave insights into the practical part of investment in the region and showed how the company has developed its manufacturing the last five years, investing about 16 million euros, notwithstanding the many difficulties.

After the plenary session, Andreas Bitzi gave the chairman’s report on the activities of the AEB in the region of the last 12 months and the outlook for the coming 12 months. The AEB will tighten its relations with the different administrations of the North-Western region and plans to have more events and activities to add value to the members.

The activities of the AEB were approved unanimously be the members.

The final speech by Ruslan Kokarev, COO of the AEB, was on the potential added value the association can offer to its members.

The event was followed by a cocktail reception.

Thanks to all members, participants, colleagues, administrations, authorities, consulates for the support of the Association of European Businesses in the Northwest.